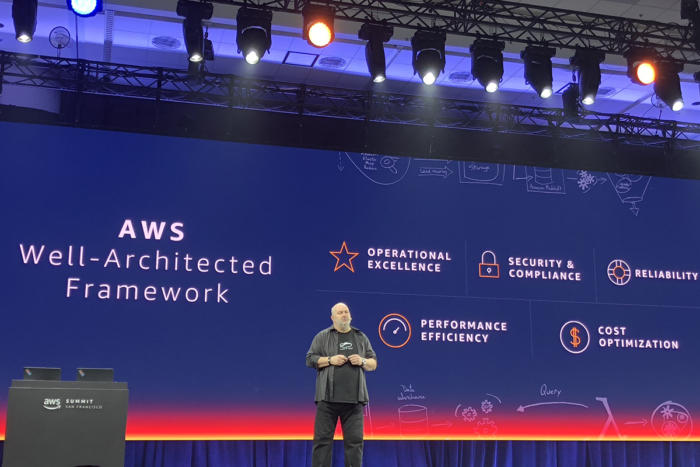 That slogan wasn’t even printed on a real T-shirt you could buy. It was just one of the choices in an online poll to choose what Amazon Web Services CTO Werner Vogels should wear. But it pretty much captured the mood at the AWS Summit San Francisco last week, where Vogels gave the opening keynote to some 9,000 cloud-loving attendees.

On stage, Vogels crowed about multiple enterprises abandoning large numbers of data centers in order to move their workloads to the cloud. He cited Cox Automotive—the company behind Autotrader, Dealer.com, Kelley Blue Book, and many more car-shopping brands—“going all in on AWS” and closing more than 40 data centers. He noted that U.K. news provider News International is shutting down 60 data centers, and GE is closing approximately 30 data centers. And Vogels mentioned that the U.K.’s Ministry of Justice was moving to AWS, as well, though he didn’t say whether it was closing any data centers in the process.

If that’s not enough, AWS announced that Shutterfly was “migrating all of its core production applications and its more than 75-petabyte image library to AWS.”

Now, not all of these moves are new, of course, and the outfits mentioned are not necessarily moving all of their workloads to the cloud and shutting down all of their data centers. And even when you add them all up, we’re talking about fewer than 150 data centers.

But still, you don’t have to be a journalism major to see that there’s a trend here. Ticking off industries from oil and gas to financial services, Werner told the AWS Summit crowd, “There’s not a vertical in the enterprise world that is not making use of AWS in some way.”

It seems clear that enterprises are moving increasing numbers of workloads to the cloud. It seems equally obvious that this migration is removing the need for quite so many proprietary enterprise data centers.

While proprietary enterprise data centers will never disappear completely, the shift to the cloud is bound to have huge and hard-to-predict effects on many elements of the IT industry. The transformation is likely to drive changes in employment opportunities for sysadmins and other operations folks and put increased pressure on broadband infrastructure to connect even more enterprises and their customers the cloud. It will change how enterprise IT allocates resources, push down Capex commitments, and raise Opex spending. And it’s already changing the market—and the customers—for the equipment that goes inside those data centers.

To be honest, no one really knows how this will all play out. But make no mistake, it’s happening.