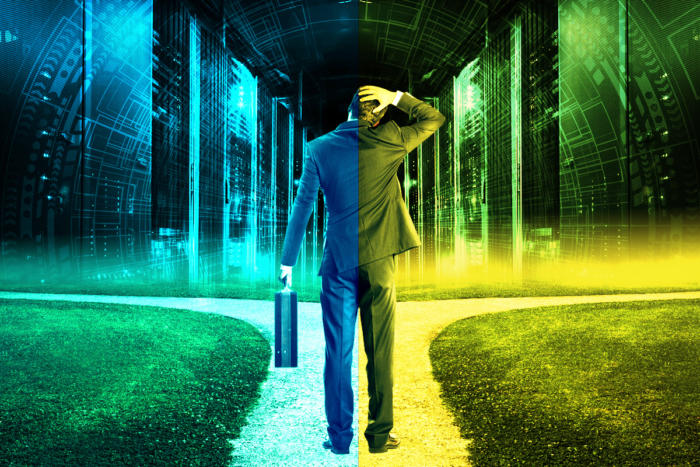 Once a niche technology, primarily attractive to organizations with specific needs, such as streamlining operations at branch offices, hyperconverged infrastructure (HCI) is rapidly finding a wide customer base.

HCI is an IT framework that combines storage, computing and networking into a single system; hyperconverged platforms include a hypervisor for virtualized computing, software-defined storage, and virtualized networking.

Enterprises planning an HCI adoption can select from two main approaches: hardware or software. HCI hardware typically comes in the form of an integrated appliance, a hardware/software package created and delivered by a single vendor. Appliance vendors include Dell EMC, Nutanix and HPE/SimpliVity. A software-only offering allows customers to deploy HCI on a bring-your-own-technology basis. HCI software vendors include Maxta and VMware (vSAN).

“There are advantages going with a hyperconverged appliance versus going with the software approach, and conversely there are cost benefits when you go with the software-only model,” says Naveen Chhabra, a senior analyst at market research firm Forrester. “Depending on the size of the deployment, on your total exposure to a particular server vendor, on the size of the organization, you may want to take one approach or the other.”

Appliance-based HCI arrives ready to use, offering vendor-guaranteed performance levels and requiring only minimal amounts of installation and configuration work.

“Users don’t need to worry about the underlying hardware, as the vendor takes care of everything,” explains Darren Wright, president of D2 Technology, a New Castle, Del., IT consulting firm. “Because they are closed systems, the vendors have better control of the hardware, which eases troubleshooting and performance optimization,” he adds.

“There aren’t any firmware issues; everything is designed to work with everything else,” he notes. “We have one source for support and we have a much smoother time.”

Appliance technology also presented Aldarondo with some important financial benefits, since it allows Post’s IT department to get by with fewer workers. “Because it’s a Java appliance, we’re able to manage it with fewer staff,” he says.

Aldarondo is generally satisfied with his choice.

“My only want is for a denser box with more resources in it that takes up less space,” he says. “It’s already small—two-rack boxes—but the denser the resources are inside of that box, the less space it takes up.”

Rich Gagnon, CIO for the City of Amarillo, Texas, says the decision whether to acquire an appliance- or software-based HCI must be rooted in real-world needs. “You have to start with the business case, then apply the technology that best fits that model instead of the other way around,” he says.

The lure of integrated operation and management technologies helped sway Gagnon’s decision to go with a Dell EMC appliance.

“It lets us be much more efficient as an IT organization and to focus on supporting our departments, our business,” he explains. “We’re driving efficiencies in their operations because I’ve got efficiencies in mine.”

“We’re a mid-size city, situated up in the (Texas) panhandle,” he states. “We’re not a Seattle or a Chicago where I can just pick up five or six storage specialists, for example.”

Appliance-based solutions make it easy for customers to specify, order and deploy an HCI. “However, there are some downsides to any appliance-based approach, regardless of the industry, as they are essentially ‘black boxes,'” observes Larry Chapman, IT infrastructure manager at Trusource Labs, a technical support services company that offers support for Internet of Things (IoT) technologies. “This is why we went to a software-based hyperconverged infrastructure approach,” he adds.

Chapman also likes that fact that he owns the software license. “We can transfer this license to a new server,” he says.

This is important to Chapman because, like many organizations, Trusource refreshes its servers every three or four years.

“Software-based HCIs can be configured to precisely match a customer’s exact CPU, memory and storage needs without overprovisioning,” Wright observes. The approach allows adopters to easily scale up or out, which helps make them easy to manage and less expensive to operate.

“While set up is more labor intensive than with hardware-based HCIs, once installed the systems are very easy to manage and deliver outstanding performance,” he explains.

A software-based HCI can also give adopters leverage to strike a deal with a hardware vendor they may already have a strong relationship with, says Michael Colonno, senior solutions architect at CDI, a firm that architects, deploys and manages hybrid IT solutions, including traditional IT, public, private and hybrid clouds. “Software-based [HCI] creates the best bang for your buck; you are truly a master of your own domain,” he says.

Yet the luxury of having multiple hardware options comes with an added risk. Hardware compatibility lists (HCL) must be closely followed, Colonno warns. “Vendors do their best to keep them up to date, as well as provide information on firmware versions, but sometimes this falls short and there are issues,” he observes.

Mariusz Nowak, director of infrastructure services at Oakland University, located in the cities of Auburn Hills and Rochester Hills, Mich., decided to go with a software-based HCI running VMware vSAN on a Dell platform because he didn’t want to give up the ability to make his own hardware decisions. “It was a matter of flexibility and freedom of choice,” he says. “When you’re buying a prepackaged solution, you have to stick with whatever the companies offer you.”

With VMware vSAN, Nowak was free to use whatever hardware approach provided the most benefits. “If you want to combine it with hardware from different companies, you decouple the hardware layer from the software layer and you have full freedom to choose and apply whatever works for you, whatever platform you are running,” he explains.

Nowak also appreciates the fact that moving to a software HCI required only a shallow learning curve. “When you choose something that you’ve already dealt with, it’s much easier to transition rather than having a new animal show up in your zoo,” he remarks. “We already knew VMware, and we didn’t have to learn third party software or a third-party appliance.”

Due diligence for hyperconverged infrastructure

Not surprisingly, given the technology’s critical importance, selecting the right type of HCI requires a considerable amount of planning and preparation.

“Do a proof of concept to make sure that HCI works for you and that the vendor meets your performance requirements,” Chapman advises. “Next, ask the vendor to provide a cost estimate for the first five years of use, assuming storage growth and the need for a hardware refresh or two during that time.”

Nowak recommends that buyers should also collect relevant engineering data and set specific requirement benchmarks. “Later on, they should compare the feature list of each solution and determine what would be the best investment based on both need and affordability,” he suggests.

Gagnon, however, cautions potential adopters of both hardware- and software-based hyperconverged infrastructure not to get bogged down by slight differences in technical specs and costs and to focus instead on the final result.

“I started as an engineer, and I love getting my propeller spun,” he quips. “I could spend all day long looking at the tech, but you also have to step back from that and put it in context in order to make a good decision.”