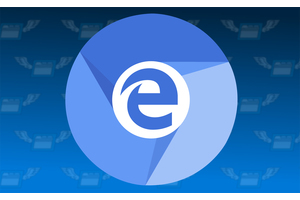 Microsoft this week announced it has ported its new Edge Chromium based browser to the MacOS, and I think this is huge. I’ve been using Microsoft browsers since they licensed its first Internet Explorer from Spyglass, and let’s just say that initial effort was raw–but so was the entire Internet.

The IT world was different back then, largely proprietary, and as such it was fighting the core concept of massive interoperability that the Web promised. Even though the browser was mostly free (something that Netscape seemed unable to figure out, to its own detriment), firms fought over unique aspects of them, creating significant compatibility problems for web developers.

Well, there is no bigger example of that world being dead than this week’s announcement of the Microsoft Edge Chromium browser for Apple. I think it is a game-changer, and here is why.

I’ve been on the Edge Chromium Browser for Windows for some time now, and it has become my default browser. It blends the compatibility benefits of Google Chrome with the legacy benefits of Edge, so that this is now, in my experience, the closest thing to a universal browser in the market.

On first load, it reminds me a bit of my first experience on Firefox, when I was amazed about how quickly it would launch web pages. It made old Edge feel ancient and even seemed to outperform the Chrome browser on my system. It also appears to address some of the unique compatibility issues that forced me to occasionally use the Firefox or Opera browsers.

It has had, during patches and updates, some issues mostly with conferencing products such as Cisco WebEx that have cropped up during updates, but it otherwise has been an impressively good browser–particularly because it is a blend of Microsoft and Google technology.

But allowing the browser to move to Apple’s platform opens an interesting new aspect for this offering.

Edge on Chromium for Apple

When I first heard that Microsoft was adapting the Chromium platform for Edge, I had to quickly check to see if the date was April 1, because it could only be a prank. But, as noted above, it wasn’t, and the result is impressive.

To go the extra yard and make the platform OS independent and allowing it to initially embrace Apple’s operating systems creates another interesting dynamic. Not only will you now have what is basically a universal standard on interoperability with Chromium across all the major OSs, but this Microsoft browser will be able to focus more on unique features rather than just mucking with the plumbing and creating compatibility issues for those of us trying to get our websites to work.

The result is effectively a common browser standard across all major platforms (porting this to Android and Chrome given its Chromium roots should be rather easy). So, we are back to the potential of one browser standard.

Now what this potentially gives us, in effect, is a common platform for all PCs and smartphones. As we move to web services like the Windows Virtual Desktop our applications will increasingly run remotely and be accessed through this common browser. This means regardless of whether you are on Windows, MacOS, iOS, Android or Chrome, you should increasingly get the same user experience on the growing number of hosted desktop applications.  In effect, this becomes the other side of Azure, and because Microsoft owns Azure, it should result in a competitive advantage for that cloud platform in terms of interoperability.

I just can’t get over how big a Microsoft Edge browser based on Google’s Chromium platform running on Apple operating systems is. The implication is a new standard platform upon which products such as Windows Virtual Desktop and any hosted application could run. As we move to 5G and bandwidths improve, the momentum to doing everything in the cloud will increase, and this new browser, eventually running on all major platforms, has a good shot at again becoming the de facto standard browser.

Microsoft got here the first time by being highly proprietary and using its market muscle, coupled with a timely Netscape failure, to own the market. What is interesting is that this time they are getting there through standards and voluntary interoperation. I don’t think there is a bigger or better example of how much Microsoft has changed, and how much the market is changing, than this offering.  It still kind of blows my mind.